How To Troubleshoot Hard Drive Detection

When running WipeDrive, there are some cases where the software doesn't detect any attached hard drives in the system and you are met with a blank drive selection list. Before coming to any conclusions about the problem being due to a software bug, missing drivers, or bad equipment, there are some things that you can try in order to track down where the issue might lie.

While at the 'drive selection' screen of WipeDrive, you can enter in a short-code command that will exit you to the Linux command line. Simply type the keys 'exit' and you will be presented with a prompt asking if you would like to exit WipeDrive. At this prompt, you will want to select 'Yes'. WipeDrive runs in an isolated Linux environment and when the WipeDrive program exits, a command line interface will be displayed. 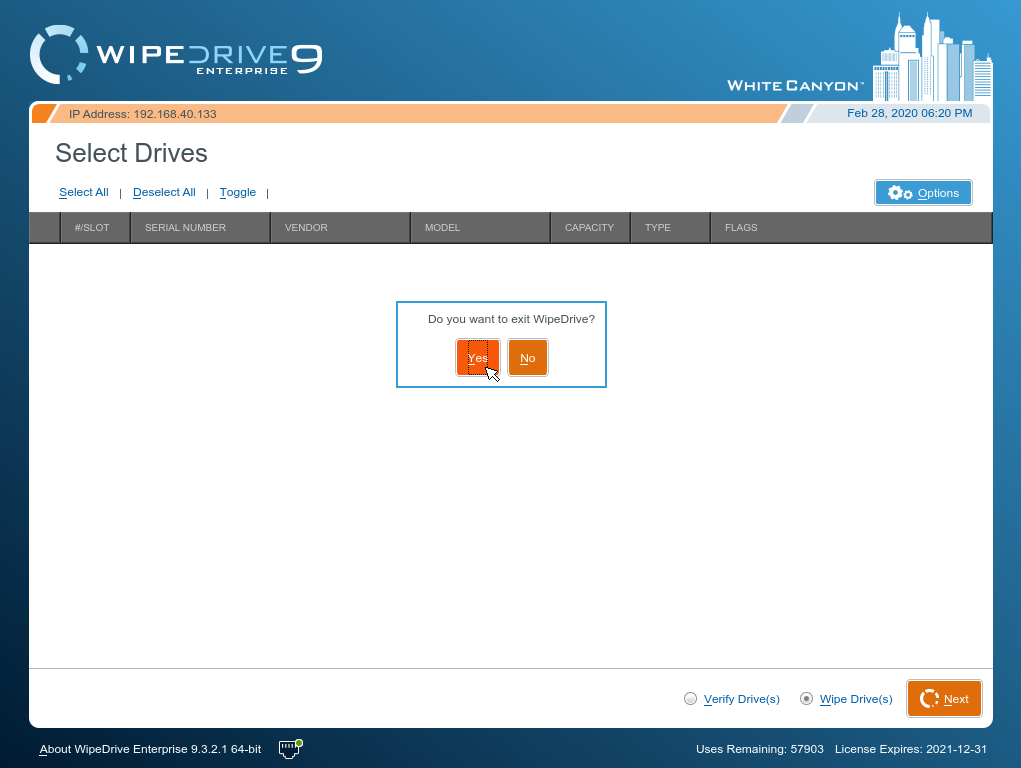 At the Linux command line, there are a few commands that need to be ran in order to determine if Linux is having trouble seeing the hard drives, or if it's WipeDrive that's having the issue.

Commands will be italicized in this guide and to run a command, simply type in the line of text and press the 'Enter' key. The command 'cat /proc/partitions' will list all of the block devices on the system along with their corresponding partitions and sizes. A block device is categorized by the Linux operating system as any device where data can be written to or read from. So devices that would be categorized as a block device are things like CD/DVD drives, USB flash drives or any other type of removable media, and storage devices (HDD, SSD, NVMe, etc).

If you booted WipeDrive using a USB or CD, there will at least be one block device listed. In the example above it shows 'sr0' which is a CD drive along with 'sda' and 'sda1' which both correspond to the USB drive used to boot and its first partition (some drives can have multiple partitions). Any drives listed after 'sda' are potential target drives for WipeDrive. For example, if your system shows drives like 'sdb', 'sdc', etc. then those drives are most likely your system hard drives. If your system's drive is listed, try running WipeDrive from its text user interface (TUI) by following these instructions: How to Run WipeDrive in Text Mode

If the target hard drive still isn't listed, the next command to run is 'ls /sys/block'. This command shows all base block devices found in the system. Sometimes a block device can be shown here but due to any issues with the hardware or device drivers, the block device wasn't fully created and as a result, didn't show up when running our previous command.

Again both 'sr0' and 'sda' are shown, but the target device still isn't found.

The last command that we want to run at the command line is 'lshw -c DISK'. This command will list all devices in the system that are categorized as disks, along with various identifying information about the device. Sometimes if a drive is slow to respond or is in a state where it has become unresponsive, it may still be listed here. If this is the case, typically these drives are faulty and have gone bad. 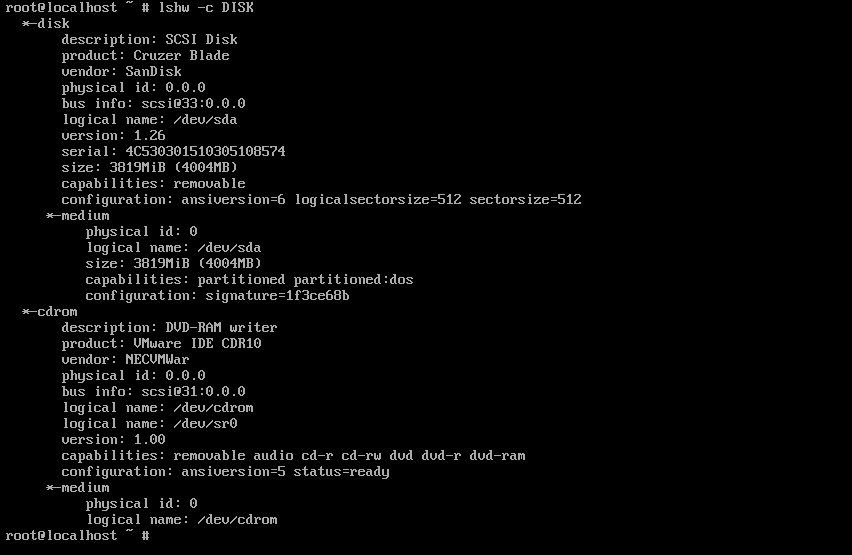 Note: This last step is only applicable to PC's and will not work on a Mac device.

If the target drive still isn't showing up anywhere, the next place to look is the machine's BIOS. This step requires a system restart and as the device starts up again, press the hot-key that triggers the system BIOS to open. Once in the BIOS of the machine, you will want to look for a section that contains storage settings. Look for a setting that controls the system's storage mode and out of the options 'RAID' and 'AHCI', make sure that 'AHCI' is selected. If 'AHCI' wasn't previously selected, now that it has been enabled, you will want to save the setting changes and reboot the device into WipeDrive once more. Hopefully this time WipeDrive should be able to detect the hard drive. If your device's BIOS was already set into 'AHCI' mode, the target hard drive may be non-functional.

If a drive is not being recognized by the system after trying all the troubleshooting steps listed above and isn't being listed within the BIOS or within WIndows/MacOS, then most likely your drive has become faulty and is no longer operational. We recommend you contact the Manufacturer your drive for repair/replacement. Most drives come with a 5-7 year manufacturer warranty.

If you have any questions or you encountered any problems along the way, please feel free to contact support for further assistance.